I have been meaning to write this up for such a long time. When I visited Iran I went to see how the rosewater is producted since they grow the most beautiful fragrant roses on the planet, the ones that are used for the most expensive  perfumes in the world.

So I decided to go via a  tour as they take you to the right places. Every year loads of loads of people like to do this tour, to see the process and to then buy some of the new season gorgeous rosewater. In Iran they use rosewater for not only skin care but extensively in cooking to inhance desserts and sweets.It goes in pastries, ice creams and rice puddings.

Off we trundled in a full coach to just ourside of Karshan, quite early in the morning so that we could see the rose pickers, which by the way is still down in the old time traditional way of hand picking! These have to be gathered pretty early so that the maximum secent is intact. 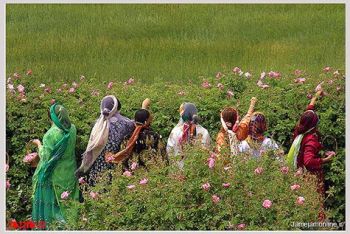 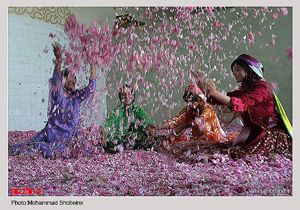 We were then invited to see the process at one of the many little outlets in the streets that product the rosewater year after year.

So here is the essence of the process.

Distillation is done in large stills traditionally of copper are filled with roses and water. The still is fired for 60–105 minutes. The vaporized water and rose oil exit the still and enter a condensing apparatus and are then collected in a flask. This distillation yields a very concentrated oil, direct oil, which makes up about 20% of the final product. The water which condenses along with the oil is drained off and redistilled (in order to obtain the water-soluble fractions of the rose oil such as phenethyl alcohol which are a vital component of the aroma and which make up the large bulk, 80%, of the oil. The two oils are combined and make the final rose otto.

The essence has a very strong odour, but is pleasant when diluted and used for perfume. Attar of roses was once made in Persia but is now mainly produced in the Rose Valley in Bulgaria.

The hydrosol portion of the distillate is known as rosewater. This inexpensive by-product is used widely as a food flavouring as well as in skin care and this is largely what Iran now produces whilst the oil goes off to France for the perfume industry.

Iran still produces its Rosewater in small family run factories which open out the street for anyone to come and see and learn about how it is made. You  can visit the little producers during the season which is around May time, you can go with a tour to the area just outside of Karsharn, they will take you to the rose growing orchards to see the beautiful roses and then you will be given a tour with a talk where you will also be able to buy some lovely rosewater yourself. 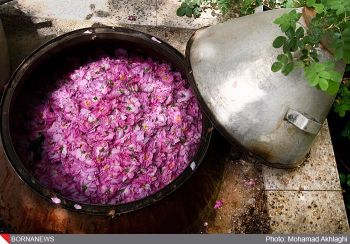 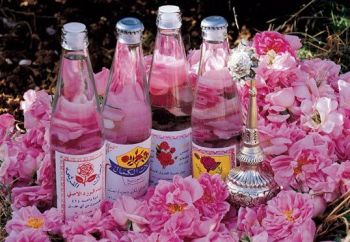 Did you know that it takes

Wow thats a lot or rose growing and a LOT of picking! Well done chaps.